5 Obscure Local Delicacies You Should Try For Iftar

With Ramadan going on, there are multiple bazaars, vendors, stalls, and even home-based businesses taking the opportunity to sell a spectrum of local meals and desserts throughout the holy month. With its vibrant and mouth-watering options, they have made a reputation for themselves for serving heart-warming local delicacies that hit right at the soul.

Ranging from murtabak, roti john, tepung pelita, onde-onde, and pulut panggang, you might think that you’ve tried everything they have to offer. But, have you ever heard of lompat tikam? Us either, until now! There’s a whole other spectrum of unique varieties with bursting flavors and textures you can find during the month of Ramadan.

Think you’ve tried them all? Take a look at these! 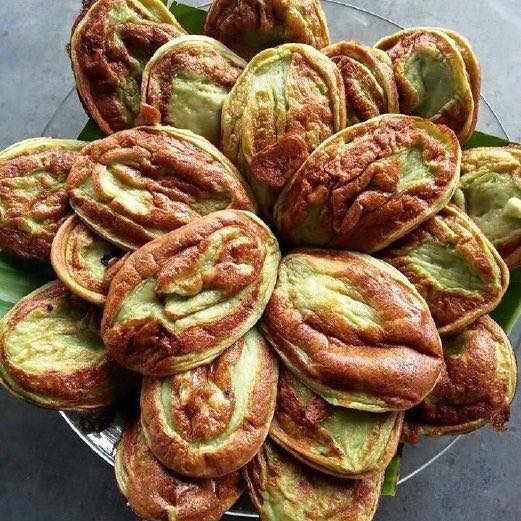 Kuih Akok or also referred to as Akok Kedut is famously known as a traditional Kelantanese dessert. Imagine a Yorkshire pudding, but sweet. That’s Kuih Akok for you. Not to forget, there’s a similar Terengganu variant to it, but today let’s focus on the klate (kla-te) version.

As most are aware, Kelantanese is known for its sweet tooth. So, it goes without saying that their foods would be made to cater to their sweet palette. Which, the Kuih Akok is baked to taste like so. With every bite you take out of the Kuih Akok, expect a smooth and soft texture with bursting sweet-coconutty flavors as well as hints of pandan fragrance lingering throughout your mouth.

Just like our atok (grandfather), the delicacy does have a wrinkly look to it but don’t let that stop you from trying it out as they’re still soft and sweet on the inside! 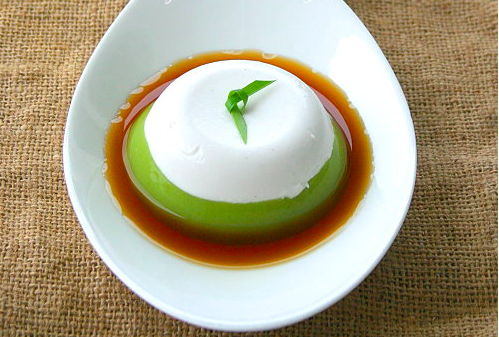 Ok, Malaysia has a funny way of naming their food. If loosely translated, Lompat Tikam means ‘jump and stab”. Though, don’t be fooled by its name as this delicacy is not even close to causing you any harm. No one can get injured by making or eating this.

Since we’ve featured the Kelantanese version for the previous one, here we’re introducing you to the Terengganu version of Lompat Tikam. Almost like the panna cotta dessert, you’ll taste a combination of flavors such as pandan, coconut, and palm sugar.

When enjoying this delicacy, you’ll experience a chill and silky smooth pudding-like texture gliding through your mouth and down to your throat as it is best eaten cold.

You’ll go uhmmm when you eat it! 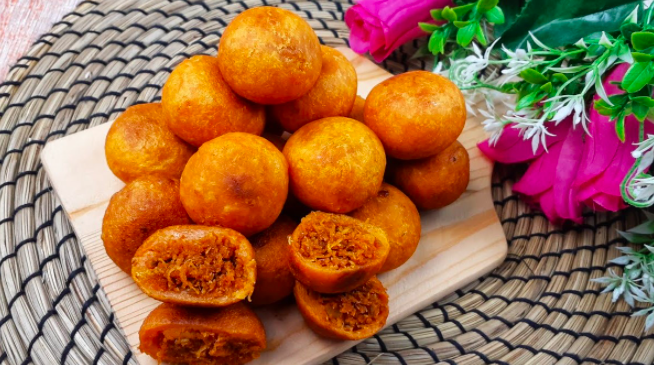 Malaysia going at it again with the name play as badak is hippopotamus in Malay. Then again, unlike the actual big-sized animal, Cucur Badak comes in cute small dumplings like sizes which you can enjoy up to 2 or more pieces (no judgments here) per serving.

The Cucur Badak is one of our favorites on the list. Made predominantly with sweet potato dough and grated coconut the preparation and serving of this local goodness is what makes it ingeniously flavorful. Filled with grated coconut seasoned with selected herbs and spices the fillings are then wrapped with sweet potato dough. Just like how hippos would wallow their whole body in water, the Cucur Badak is deep-fried to golden-brown perfection.

Crunchy, sweet, spicy, and a little bit salty. This combination of flavors and texture will make you want more than just 2 pieces.

Malaysia’s kuih-muih are known for their bright and bold colors. Not to mention, each kuih would come in different shapes and sizes. Though, despite all their unique differences on the surface, what they all have in common is the surprising taste that comes within and kuih Kera Berlauk is no exception.

Kera Berlauk is a bite-sized treat that is made of savory cakes and topped with minced meat. The batter for the cakes usually incorporates coconut milk and gets its distinctive yellow color from the addition of turmeric. It is then molded into a shape resembling a half-cut walnut shell and topped off with fillings of minced meat, shallots, onions, and thinly sliced red chili. Expect soft but savory goodness with a light spicy kick to it.

Local kuih-muih are often sweet but the Kera Berlauk is one savory contender you don’t want to miss out on. 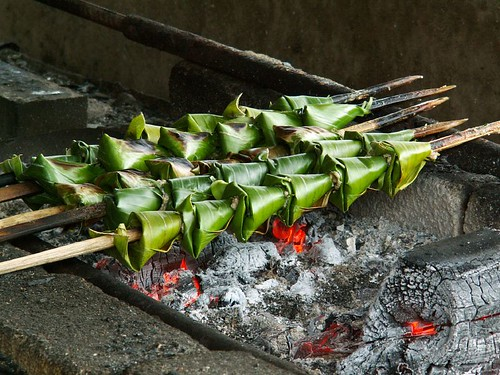 We got sweet granddad, fancy pudding, a hippo(?), walnut-shaped kuih, and now what? Well, now we have Sata. A computer bus interface that connects your mass storage devices — Jokes! Really, what is up with Malaysia and its weird food names?

Sata is a delicacy from Terengganu, consisting of spiced fish meat wrapped in banana leaves, poked through a skewer, and cooked on a grill. Sata is similar to another local favorite, otak-otak, but with more fish, less spice, and larger portions. As you unwrap the lightly burned banana leaf, be prepared to get hit by a fragrant of fish paste mixed with onion, ginger, and cut red chilies.

Fish paste, onion, and ginger? Might not sound as appealing right now, but you’ll understand when you get your hands on them.

From the lingering smell of aromatic pandan to the well-combined flavors of bite-sized goodness. There’s a whole other list of options that conjures delightful flavors just waiting for you to try out there.

Do you have any other obscure local treats you’ve tried and like to share with us? Do so at info@xaviermah.my